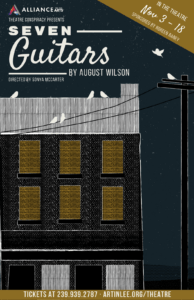 Theatre Conspiracy at the Alliance for the Arts presents Seven Guitars by August Wilson, directed by Sonya McCarter this November. This lyrical play is part of August Wilson’s American Century Cycle, which charts the African-American experience through each decade of the 20th century.

After serving jail time on a trumped-up vagrancy charge, blues musician Floyd Barton sets out to win back his girl and reclaim his pawned guitar, hoping to make a new hit record. Set in 1948 in the backyard of a Pittsburgh apartment house, Seven Guitars follows Floyd’s circle of friends and neighbors—the play’s seven voices—as they spin a rich tale of the deck that’s stacked against them, what they’ve lost and all they dream.

“August Wilson excelled at writing plays that chronicle the black experience in America, spanning several decades,” says director Sonya McCarter. “What impresses me the most about his work is its universal themes of love, honor, duty and betrayal. No matter your race, religion or cultural background, his stories accentuate the passionate, fearless and indomitable spirit of mankind despite life’s struggles.”

Seven Guitars opens  Nov. 3 through Nov. 18 at the 10091 McGregor Blvd. Fort Myers, FL 33919. Performances are Thursdays, Fridays and Saturdays at 8 p.m. with a 2 p.m. matinees on Sunday. This production of Seven Guitars is kindly sponsored by Noreen Raney.

Season subscriptions  are available and range from $105 per person for 5 shows to $133 per person for all 8 shows. Individual tickets to each show are $25, $11 for students or $22 for Alliance members.