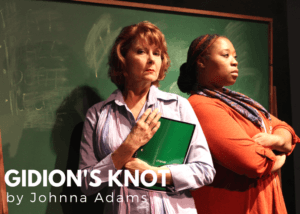 Amidst the fallout from her 5th grade son’s suspension from school, a mother demands answers. What begins as a highly charged parent/teacher conference with Gidion’s reticent teacher soon develops into a revelatory confrontation that burrows under the surface of bullying, failures of the education system, and freedom of expression.

“I am thrilled to work on such a female-driven project,” says Endrizzi in a director’s note. “This play is written by a female playwright Johnna Adams, stars two amazing female actresses playing two strong, well-developed characters and is directed, assistant directed and stage managed by females.”

“I am fascinated at Ms. Adams ability to layer so much power, emotion, suspense and subtext into so few words,” says Endrizzi. “The play itself is short, but loaded with so many thought provoking questions. The script eloquently addresses the issues of guilt, artistic censorship, and maternal loyalty set against the backdrop of today’s education system.”

What the Critics Say:

“…resonant…[a] particularly eloquent study of people caught between the competing demands of reason, morality and family…harrowing…a narrative that is as elegant as it is chilling.” —Washington Post

“Gidion’s Knot is is as sad as life itself, and as funny and startling as well…a beautiful, disturbing story.” —DCTheatreScene.com

Lauren Drexler was most recently seen in 33 VARIATIONS and KAYAK.  Lauren has long created memorable roles in Theatre Conspiracy’s new plays and world premieres, including Becoming Eleanor, The Dunes, Here Lie the Demons, and Virgin Tears on Wyoming Avenue. Among her other favorite productions are The Kathy & Mo Show, Medea, Romance in D, Romantic Fools, No Exit, Dancing at Lughnasa, Frankie & Johnnie at the Clair de Lune, and The Eight: Reindeer Monologues.

Sonya McCarter is a native of Fort Myers and the Community Engagement Coordinator at the Alliance for the Arts.  Sonya’s directing credits include The Bluest Eye, Seven Guitars and Ma Rainey’s Black Bottom. Sonya has been seen performing locally in For Colored Girls (Theatre Conspiracy), Good People (Naples Players), and Doubt, A Parable (Naples Players).

Endrizzi is thrilled to return to Theatre Conspiracy at the Alliance for the Arts with this show and this cast. Previous Theatre Conspiracy directing credits include: 33 Variations, The Bible: Complete Word of God (Abridged), Red Herring, Mr. Burns, The Complete Works of Shakespeare (Abridged), All the Great Books (Abridged) and Shipwrecked!. Rachael has also been on the Theatre Conspiracy stage as an actor in Almost, Maine, First Time, Love Loves a Pornographer and others. She is a graduate of the American Musical & Dramatic Academy in NYC and the former Education Director for Florida Repertory Theatre. Currently, she works as an actor and director throughout the Southeast and resides outside Cleveland, OH where she has opened her own company, Spark Theatre.

Robbins could not have chosen a better play, director, cast and theater than Gidion’s Knot to get her feet wet in Fort Myers.  In Pennsylvania, she performed in community theater, and as an English and Theater teacher, she directed many high school plays, including Don’t Drink the Water, Enter Laughing, Dracula, and JB. When she relocated to Delaware, she performed in and directed several community theater productions, including You Know I Can’t Hear You When the Water’s Running, Talking With, and Hold Me, a cutting of which went on to the state one act play festival to win her the director’s award.  In the early 90s, she transitioned from writing fiction and poetry to playwriting.  Then, as associate creative director for First Stage Theater Company, she joined with her mentor, playwright and novelist, Drury Pifer, in directing the premiere of his play Strindberg in Hollywood, which was then produced at Woolly Mammoth Theater Company in D.C. before being picked up in Norway, England, and Germany. First Stage also produced two of her plays, Man Imperfect and Athena at the Rittenhouse, in various venues throughout Delaware. She and her husband Gary are active in the Pachamama Alliance of Southwest Florida and feel fortunate to have relocated to Fort Myers, for its warm weather, wonderful beaches, welcoming people, and wide array of quality live theater. Their 20-year old cat, Zen, seems quite content as well.