Your love, their musical

Your love, their musical 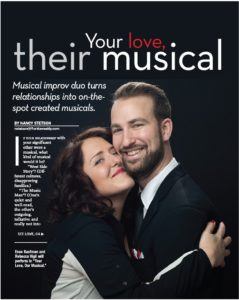 IF YOUR RELATIONSHIP your significant other were a musical, what kind of musical would it be?

“Groundhog Day”? (You’re in a rut and every day feels the same.)

“Beauty and the Beast”? (Self-explanatory. But really, why do opposites attract? Cue Joe Jackson’s “Is She Really Going Out With Him?” which opens with a complaint about seeing “pretty women out walking with gorillas down my street.”)

Rebecca Vigil and Evan Kaufman think couples’ relationships are the perfect fodder for a musical and have created fully improvised shows for hundreds of them based on each couple’s own unique love story.

The two bring their musical improv show, “Your Love, Our Musical” to Theatre Conspiracy in Fort Myers for four shows, Jan. 11-14.

They describe the show on their website as “just like ‘Hamilton’… if ‘Hamilton’ was about how you met your boyfriend online dating.”

Musical improv, they say, is like regular improv, but much more complex. The performers, along with their musical accompanist, have to create songs, complete with rhyming lyrics, on the spot.

“It’s a whole other level of skill,” says Ms. Vigil. “You’re doing two different skills at the same time, which are both difficult: you’re basically composing music and lyrics alongside constructing a narrative and jokes. We go on all cylinders.”

“Improv in general is juggling a bunch of different things,” says Mr. Kaufman. “Musical improv is adding one little extra piece — music. It’s a complex little piece, I guess you would say. It breaks down into a couple of different things: finding the melody or tone or genre of the songs, working your way through the song to heighten or continue to explore the theme. And then the third piece is rhyming, which is the thing people find the most impressive, but is always the last thing we think of, when doing a song. It’s like a muscle; you exercise it and work it, and eventually it becomes second nature to you.”

The other factor, he says, is what’s called “an offer” in improv: Someone comes out and says something, which gives you a piece of information, even if it’s just as simple as “Beautiful day today.”

“The other person who is part of our scene is Dan Reitz, our musical director and accompanist,” says Mr. Kaufman. “He is almost like a third improviser. When he feels the emotions building in a scene, he plays music that matches, or juxtaposes something opposite for comedic effect. Dan basically provides us with an offer for our scene and for our song.”

The show works like this: the two choose a couple from the audience, people who volunteer to talk about their relationship.

It’s not like stand-up, Ms. Vigil hastens to say, where if you sit in the front rows, you risk becoming the comic’s punching bag and the brunt of a joke or two.

“Some people have trepidations that if they (volunteer,) we’re going to be mean to them. Our show is celebratory. We like to celebrate these two people (who we base that night’s musical on.) It’s like we’re at a party for these people.”

“We had one (show) recently, and the word was ‘political,’ which is an interesting way to think of a relationship,” says Mr. Kaufman. “Sometimes people say, ‘drunk.’ Those are always good. Or ‘Tinder.’ Sometimes people will say ‘at first sight,’ which is more than one word.

“Sometimes we pick people who are the most enthusiastic, or look the most interesting. It always works out.”

They’ve only had one show where no one volunteered.

So, like good improvisers, they immediately switched gears and did a break-up show, creating a musical about one man’s break-up.

“That was real juicy, really dramatic,” Ms. Vigil recalls. She was excited because she got to play emotions she typically doesn’t get to play.

“I got to play this horrible, crazy, villainous girl,” she says, “the antagonist, who was super evil.” 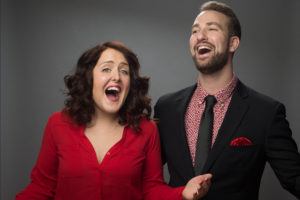 (The guy was at the show, and the woman he’d broken up with obviously wasn’t in attendance.)

Once a couple is chosen, they’re invited on stage where they are interviewed for approximately 25 minutes.

They are asked a multitude of questions, about how and where they met, when they had their first kiss and who said, “I love you” first.

They are asked what their pet peeves are about their partner.

“It’s always funny,” notes Mr. Kaufman. “Most of the time, the women have very specific pet peeves: He says he’s listening, but he’s not listening. Then the fellow is like: she’s perfect, I love her, she’s great.

“Sometimes it’s as boring as, ‘They don’t put the dishes away.’ Sometimes it’s weird stuff like, ‘I don’t like their feet and they don’t wear socks around me.’ One woman was angry with the fellow because he refused to close doors. Not just the cabinets, but the front door. People have problems with the way people sleep or the way they chew. It’s pretty incredible anyone’s together at all, really.”

Sometimes people are a little nervous or shy. Sometimes they try to be a comedian and make up answers, but their significant other will call them on it.

They try to make the interview feel like a talk show.

“As with any good interview, questions beget more questions,” he says.

“We joke with them, we joke with each other, we go through their whole story,” adds Ms. Vigil. “We try to make the interview an entertaining portion of the show. The first half is this interview with this real couple, and then the second half is when the magic happens. The piano player starts immediately.”

Though people think they work with pre-planned templates, they don’t.

“Every single time he plays, we’ve never heard it,” she says.

For example, she says, a couple might talk about how they went to a Metallica concert together, and Mr. Reitz will incorporate a Metallica song into the score.

They’ve done hundreds of shows, many in New York, where they’re based. Some audience members become repeat attendees, because the show is completely different every time.

“We kind of created the relationship then, (imagining their future,)”, says Mr. Kaufman.

Some shows stand out.

“We have every connection conceivable,” he says. “People who met through friends or in bars. A lot of people meet online now. We had a couple who met online in one of the first chat rooms that ever existed. They were both interested in computers. One lives in England, and the other lived in the U.S. So, we probably met the first couple who internet dated.”

Mr. Kaufman and Ms. Vigil are comedic partners, but not romantic ones.

Ms. Vigil originally conceived the show with partner David Magidoff, when she lived in Los Angeles. They performed the show, with a different name, in the L.A. region. Then she moved to New York “about 2007, 2008,” she says and wanted to continue to perform the show.

She happened to see Mr. Kaufman in a show in Boston, and thought he’d make a great musical improv partner.

It’s a shame he lives in Boston, she thought. But about a year later, unknown to her, they were cast in the same show in New York. Ms. Vigil was surprised when he walked through the door.

She told him her concept, and “Your Love, Our Musical” was formed four years ago.

“There’s a lot of interview shows and musical improv shows, but the idea to combine them was what made ‘Your Love’ kind of special,” he says.

They were looking forward to performing in Fort Myers.

“We have four shows down there,” says Ms. Vigil. “We get to meet four different couples.”

They know Florida skews older than most states, but that doesn’t faze them. Some of their favorite shows have been with couples who have been married for decades. One couple, they remember, was married 50 years; she was a nurse and he was a doctor.

“Their story spanned so many decades,” says Ms. Vigil. “You get to play with time and references to everything else (in history and pop culture).”

“Older couples have much more experience; they know each other, they have more stories, so you’re able to get a complete picture, which makes for a better musical,” says Mr. Kaufman. “Young people haven’t been through as much.”

If there’s one theme that threads through all their shows, it’s that “no matter how difficult a relationship is, or what obstacles they face, people seem to find a way to be together,” he says. “Sometimes we’ll hear these stories and think: it’s impossible, how did these people end up together, whether it’s family issues or distance or the chance of their meeting was so slim, where they met and how they met.

“Your Love, Our Musical”

>> More: Evan Kaufman and Rebecca Vigil will host a two-hour Musical Improv Toolkit Workshop at noon Saturday, Jan. 13. Open to those 16 and older. Tickets are $45.