Theatre Conspiracy at the Alliance for the Arts Presents TheMountaintop by Katori Hall Jan. 16 – 18 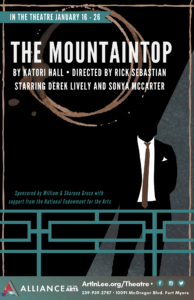 Theatre Conspiracy at the Alliance for the Arts presents the award-winning The Mountaintop  by Katori Hall and directed by Rick Sebastian  Jan. 16 through 26 at 10091 McGregor Blvd. Fort Myers, FL.  The production stars local powerhouses Derek Lively and Sonya McCarter and is presented in conjunction with the 35th Annual Dr. Martin Luther King Jr. Legacy Weekend hosted by the Dunbar Festival Committee.

What thoughts and emotions might have pulsed through the mind and heart of Martin Luther King, Jr. on April 3, 1968, his last night alive? In The Mountaintop, an exhausted Dr. King retires to his room at the Lorraine Motel in Memphis after delivering his magnificent “I’ve Been to the Mountaintop” speech. As a storm rages outside, a mysterious hotel maid brings King a cup of coffee, prompting him to confront his life, his past, his legacy and the plight and future of the American people in a reflective, touching and often funny way.

This production is sponsored by William and Shareen Groce with support from the National Endowment of the Arts.

Individual ticket prices are $26, $11 for students or $22 for Alliance members. Performances are Thursday, Friday and Saturdays at 7:30 p.m. and Sunday matinees at 2 p.m.

An audio described show is available on Jan. 26. For theatregoers who are blind, or have moderate to severe vision loss, the Alliance will provide a specially trained describer who verbalizes what’s happening on stage during pauses in dialogue. The describer uses a headset microphone, while individuals using the service listen through a receiver with a single earpiece. Reservation of headsets is required prior to the show by calling 239-939-2787.

To widen the post-show conversation and discuss what the art onstage means to us as individuals and as a society, the Alliance will facilitate a community conversation through talkbacks after the Jan. 19 and Jan. 26 matinees. Talkbacks allow the audience to ask questions and express their thoughts, ideas on issues revealed in the play through the form of meaningful discussion.  The Jan. 19 talkback will feature the director and cast and the Jan. 26 talkback will be hosted by a panel facilitated by Director of Diversity and Inclusion at the Lee County School District, Jarret Eady. The opportunity is included with ticket purchase.

To purchase tickets or for more information, call the box office at 239-939-2787, visit 10091 McGregor Blvd. Fort Myers, FL or go online at ArtInLee.org/Theatre.

Sonya McCarter, Community Engagement Coordinator, Alliance for the Arts and playing the role of Camae in The Mountaintop

Mrs. McCarter is the Community Engagement Coordinator at the Alliance for the Arts as well as a director and actress. Her heart’s passion is to help facilitate engaging and meaningful theatre that features strong African-American characters and stories. McCarter has appeared in television (Burn Notice), film (The Florida Project) and theatre. Her directing credits include: The Bluest Eye, Ma Rainey’s Black Bottom, Seven Guitars and Raisin in the Sun. She holds a Master’s Degree in Oral Interpretation of Speech and Theatre Arts. Mrs. McCarter will play Camae in The Mountaintop and coordinate and participate in a post-show talk backs and panel discussions. Mrs. McCarter will also help to plan and execute surrounding events.

Derek Lively, Equity Actor and playing the role of Martin Luther King Jr. in The Mountaintop

Derek Lively is a professional actor and has appeared in productions ranging from Shakespeare to Eugene O’Neill and has worked in regional theaters and Off-Broadway, including The Public Theater and LaMama E.T.C. His solo show, Welcome To My Soul, which he wrote and performed, led to a first-look development deal with NBC (Universal). He is a proud member of Actors’ Equity Association and SAG-AFTRA. Mr. Lively will play Dr. Martin Luther King, Jr. in The Mountaintop and participate in a post-show talk back.

Rick Sebastian, director of The Mountaintop

Rick Sebastian holds an M.F.A. in Theatre Acting & Directing from Florida Atlantic University. He has over 30 years of experience in Film, Television, and Theatre. Acting credits include School for Wives, The Odd Couple, Claudius in Hamlet, Big Daddy in Cat on a Hot Tin Roof, and Big Julie in Guys n Dolls. Directing credits include Betrayal, The Best Man, The Country Wife, The Elephant Man, The Nether and numerous stage readings of new plays.