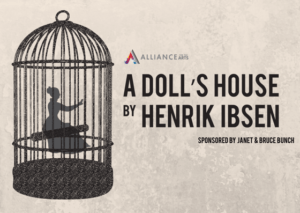 Theatre Conspiracy at the Alliance for the Arts presents A Doll’s House by Henrik Ibsen March 1 – 11 at 10091 McGregor Blvd. Fort Myers, FL 33919. The production is directed by Anne Dodd, stars professional Equity Actor Brendan Powers and is sponsored by Bruce and Janet Bunch. The 1879 classic play about love gone awry has come to be considered a contemporary feminist drama.

A look behind the façade of an ideal marriage: Nora and Torvald Helmer are living their dream life, happily married with children and security. Their nine-year, three-child marriage stays fresh because Nora happily embodies the childlike role defined by her husband, while he relishes his idealistic view of marriage as a sacred trust in which the man rules benevolently. “To lie in a family home,” he lectures, “diseases it, contaminates it.” When Nora risks her reputation to save her husband’s life, the consequences test the limits of their love.

To purchase tickets or for more information, call the box office at 239-939-2787 or visit www.ArtInLee.org/Theatre.

About Henrik Isben and A Doll’s House

In 1871, eight years before Henrik Ibsen wrote A Doll’s House, Ibsen met a Norwegian girl called Laura Petersen. Ibsen took quite a fancy to her and called her his ‘skylark.’

In 1872, she married a Danish schoolmaster, Victor Kieler, who subsequently contracted tuberculosis. His doctors prescribed a warmer climate, but they were poor, and Victor became hysterical at the mention of money. Laura arranged a loan without her husband’s knowledge, for which a friend stood security. The trip to Italy thus financed was successful, and Victor made a good recovery.

Two years later, however, repayment of the loan was demanded. Laura did not have the money herself, dared not tell her husband and, worse, still, the friend who had stood security had himself fallen on hard times. Laura attempted to pay off the loan by forging a check. The forgery was discovered, the bank refused payment, and Laura was forced to tell her husband the whole story. Despite the fact that she had done it purely to save his life, Victor Kieler treated Laura like a criminal. He claimed she was an unfit wife and mother and when she suffered a nervous breakdown, he had her committed to a public asylum, and demanded a separation so that the children could be removed from Laura’s care. She was discharged after a month, and managed to persuade Victor to take her back for the children’s sake, which he eventually, but grudgingly, agreed to do.

In September 1878, only a couple of months after hearing about Laura’s committal to the asylum, Ibsen began work on A Doll’s House. In his notes he wrote the following: A woman cannot be herself in modern society with laws made by men and with prosecutors and judges who assess female conduct from a male standpoint.