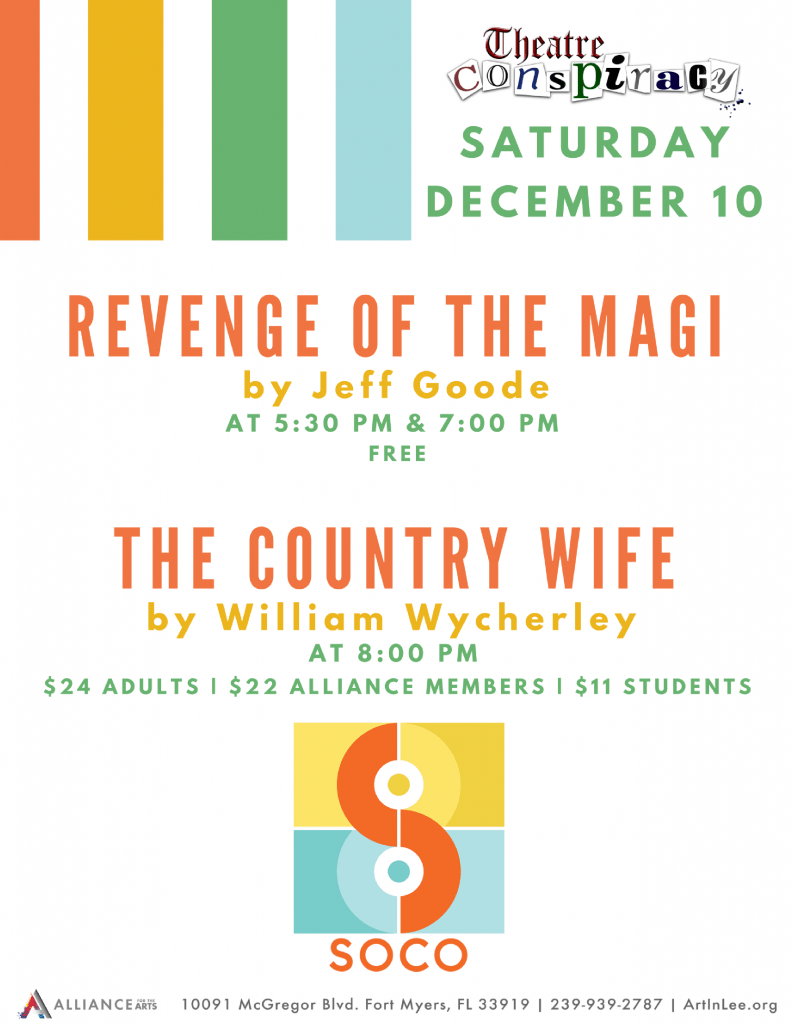 To date, the December 2016 participating cultural stops are:

The Alliance for the Arts is one of the headliners in the event. The Alliance Off the Wall: 200 Under $200 exhibit will be on display from 5 PM – 7:30 PM. Coinciding with the onset of the holiday shopping season, this non-traditional art show features works of all mediums priced at $200 or less. All sales are “cash and carry,” meaning purchasers will get to take the piece with them when they buy it, instead of waiting until the end of the exhibit. This exhibit is kindly sponsored by Clif & Tina Parker.

Theatre Conspiracy will present The Country Wife at 8 PM, a classic comedy by William Wycherley. ‘He’s a fool that marries, but he’s a greater fool that does not marry a fool.’ This bawdy, hilarious, subversive and wickedly satirical comedy pokes fun at the humorless, the jealous, and the adulterous alike. It features a country wife, Margery, whose husband believes she is too naive to cuckold him; and Horner, who pretends to be impotent in order to have unrestrained access to the women keen on ‘the sport’. Tickets to this production are $24 for adults, $22 for Alliance for the Arts members, or $11 for students.

Prior to The Country Wife, Theatre Conspiracy will be performing the short one-act play Revenge of the Magi by Jeff Goode at 5:30 PM and 7 PM. These performances are free to attend.

Artists Marilyn Hedlund and Shawn Holiday will demo onsite. Marilyn Hedlund’s impressionist style with acrylics began in Gale Bennett’s classes in Southwest Florida and grew in France at his 2001 Art Study Giverny summer session. Shawn Holiday has been teaching area residents, students and visitors how to make baskets using the spade of the royal palm frond for 10 years.

For a full list of programs and cultural stops, visit www.SoCoSWFL.com.