Meet the Women in Jeopardy 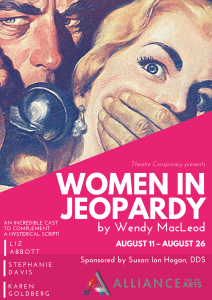 Let the zaniness begin! Liz Abbott, Stephanie Davis and Karen Goldberg are in jeopardy in the first theatre production of our 17/18 season, opening August 11. Women In Jeopardy by Wendy MacLeod takes us into the lives of three divorced women of a certain age—ringleader Mary (Liz Abbot), sidekick Jo (Karen Goldberg) and exasperating foil Liz (Stephanie Davis).  The starring ladies reveal what Kevin Spacey, Dollywood and Bloody Marys mean to them.

With all expenses paid to pursue your writing or acting, where would you choose to live and work next summer?

Liz Abbott: I love to write, however, I don’t consider myself a “writer”….although….possibly in my future! Cinque Terre. I honeymooned there. It was extraordinary. I long to return.

Stephanie Davis:  A remote cabin in the Smoky Mountain (preferably near a babbling brook).

Karen Goldberg: I would love to pursue theatre in New York City. It is simply the center of the theatre world and there are many opportunities for me to hone my craft.

If you didn’t write or perform, what would you like your creative outlet to be?

SD: Singing — but being tone deaf prevents me from sharing my voice with the world (you’re welcome).

KG: I would probably sing if I wasn’t acting. I grew up singing and embarrass my children whenever possible by breaking into song.

LA: Can I possess my kids? That’s kind of weird. I guess possession wise, my wedding band. It was my grandmother’s on my father’s side. Opal and Dale married in 1924. My grandmother, whom I adored, gave me her wedding set on her death bed. It symbolizes a great deal to me 94 years later.

SD: My iPhone (mostly because it has all my photos in it and I treasure them).

KG: I do not treasure possessions. I treasure people. My three children are the light of my life and I treasure them more than anything.

LA: I have traveled and seen many a fabulous hotel, restaurant, show, etc…It always boils down to: Sushi and a good beer…Alone with my husband on our family room floor.

KG: I like to eat out a lot. I spent many years cooking every meal for my family and now I am tired and want others to cook and clean for me.

What playwright or actor would you most like to meet?

LA: I really don’t want to meet any of them. I have.  It’s so awkward. I like adoration from afar. That said, I have envisioned my grand awkward moment with Carol Burnett over and over.

SD: Since I’ve already met Meryl Streep, I now want to meet Jessica Lange. Not only do I want to meet her, I want have martinis with her.

KG: I am a huge fan of Kevin Spacey. His acting ability is just phenomenal and I would love to learn from him by performing together.

SD: The Life Story of the Gal who had Martinis with Jessica Lange

LA: ALL of them. And they know who they are and what I adore about them and need from them regularly. I’m an only child. They know they are being held accountable.

SD: That they can be counted on to pick up the phone by the second ring when I call.

LA: Hmmmmmm. I was raised by a very beautiful and confident woman. I like a lot about myself. I am also my largest critic. I pride myself on inclusion. I never want anyone to feel left out. I’m also known for making a grand, festive celebration or tradition out of the smallest of situations. I also love a pun.

SD: My amazing interpretive dance skills after I’ve had two shots of tequila.

KG: I crack myself up a lot so I have to say my sense of humor. It rarely lets me down even in the worst of life’s moments.

LA: I gave up on seeking fame years ago. Fame is relative.

SD: Dollywood — because it’s so close to my imaginary Smoky Mountain cabin with the babbling brook.

What is your favorite one liner from Women in Jeopardy?

LA: When asked to share a favorite line from the show…I am immediately drawn to one. It’s not a line I say in the show, however, it’s one that strikes a magical chord. I quite enjoy a bloody Mary. Often, I post on Facebook when I am enjoying a special moment with a bloody Mary and am quick to caption the event with a clever quip, such as; “It’s a joyous day for my kids to return to school Mary!”

Thus, my favorite line  in the show is Trenner’s at the end of Act One: “Suffice it to say I’ll be worth it Mary!” You can bet your ass that will be my post the morning after we open when I’m enjoying a little Mary of my own.

SD:  “I swear to God she’s so stupid she deserves to die!”

KG:  “Of course we know it was a man. Women don’t kill strangers, they kill husbands.”