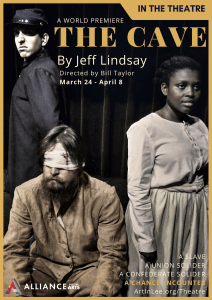 I believe it is important to support live theater in Florida. We must get tickets and get out of the house and go. Your kids and grand kids need to know live theater.

There is a perfect “must see” on a local stage right now.  It is a  World Premier at the constantly experimental Theatre Conspiracy in Fort Myers. The artistic director, Bill Taylor, has found a play totally worthy of our attention. It is called, The Cave, by Jeff Lindsay.

The time is near the end of the Civil War. We meet a young African American runaway slave girl, Cassie, played by a fine young actress, Marie Baptiste.   Cassie  is trying to read the Bible, never having been to school. She knows enough to phonetically struggle.  And, suddenly, a badly wounded Confederate soldier breaks through the hole in her hideaway cave.  The soldier, Brandon, strongly portrayed by Jordan Wilson, has been blinded in battle, tattered and torn, and near collapse.  The plot thickens when a young Union soldier who has deserted his unit bursts into the cave.  It is a powerful evening and a fine example of great local community live theater.    Get tickets fast.

Sidney B. Simon, Sanibel
from The News-Press Mailbag for April 2