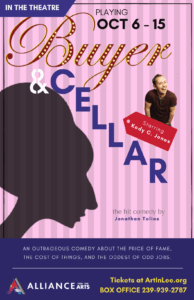 Jonathan Tolins’s multicharacter megalogue—starring Florida Rep’s Kody  C. Jones —is an outrageous comedy about the price of fame, the cost of things, and the oddest of odd jobs.

Buyer and Cellar is a hilarious fictional account of one man’s experience working in the basement shops of Barbra Streisand’s home. Alex More, a struggling actor in L.A. takes a job working in the Malibu basement of the beloved megastar. One day, making a rare appearance, the Lady Herself comes downstairs to play.

Even if you don’t give a hoot about divas and divalogy – you’ll find yourself hopelessly involved in this simple, silly, sweet-and-sour story of people… who need people… enough to buy people.

Kody C Jones: My most treasured possession is a tough one because its my dog and I consider her my daughter more than a possession. I’ve had her for almost ten years and she has been on this wonderful journey with me all over the U.S. ever since.

Why do a one-man show?

KCJ: The reason I did a one-man show is because I was looking for a challenge. I’ve done over a 100 plays and many of them were two person productions and I remember how challenging they were. Relying on just one other person to tell a story and transform an audience to another world. The thought of doing it alone seemed near impossible so I was hungry for the opportunity to try it.

Tell us a little about touring.

KCJ: Touring can be a lot of fun but its also a lot of work. It becomes a lifestyle of sorts. It changes your routine immensely including how you eat and exercise and how you spend your personal time. But its an amazing adventure and I couldn’t think of any better way to see new places and meet new people. Every audience is also different and their energy and reactions can change throughout a tour depending on what region you are in. That keeps you on your toes as an actor and changes it up for you during the show.

KCJ: My greatest extravagance is probably my obsession with Holiday decorations, specifically Christmas, Easter, and Halloween. I just love taking time out of the year to celebrate something and spend time with friends and family.

What playwright or actor would you most like to meet?

KCJ: An actor whose work I really honor and enjoy would have to be Benedict Cumberbatch. I actually took a course from him in London, England in 2006 before his fame really started to hit. He’s a very decisive and carefully actor, who uses his brain to its utmost potential with every single delivery. Being the character isn’t enough for him, he as the actor needs to understand the character and every complexity that character might exhibit. 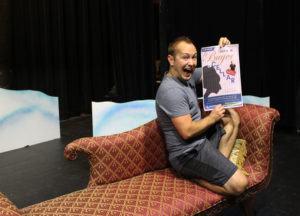 KCJ: An all-expense paid gig? I’d go back to London. I studied theatre there for almost four months and loved the timeless and historic feel of the area and how theatre was not an extra hobby or art form that only a select few creative types might enjoy but a form of entertainment that was a major focus in that country. Citizens were united there in seeing it’s overwhelming benefits to its people, and not just for entertainment but an outlet for exploring humanity and asking ourselves questions about society and the world we live in.

What is your favorite one liner from Buyer & Cellar?

KCJ:My favorite line from Buyer and Cellar, towards the end of the play, Alex says “All that effort, All those things” referring to the massive collection in Barbara’s basement. I think this is a perplexing realization. We live in a world or society that constantly promotes the idea of obtaining more. Tangible items in particular, and obtaining the wealth to acquire such “things”. We become obsessed with getting and obtaining and forget about the process and not so tangible things we experience in life like failing, loving, and dreaming.