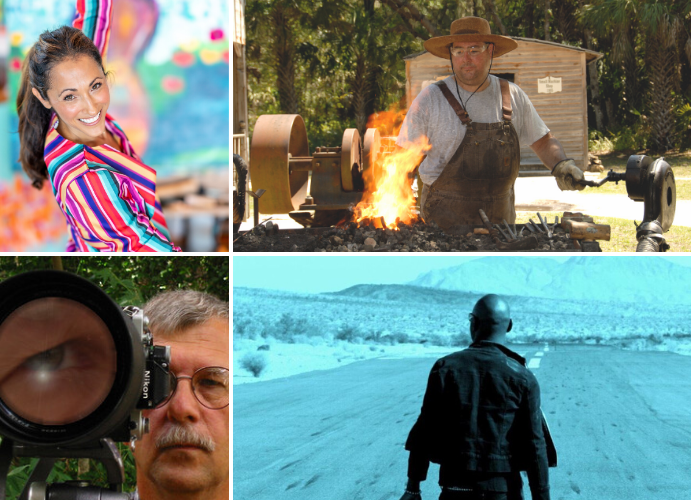 Take a road trip with your friends and see creativity up close and personal. Discover the sanctuaries where local art is created, mingle with the makers and gain a close-up view of the materials each artist employs. This go-at-your-own-pace self-guided tour begins at 10 a.m. at the Alliance for the Arts where ticket holders receive a map to the artists’ studios, spaces and homes. A closing reception with refreshments begins at Sanibel Pottery Studio at 3 p.m.

Brian Wyllie is an adventurist, outdoorsman, craftsman, geocacher, scuba diver and windsurfer who built his first boat with his brother at the age of 10. He has been building wooden boats ever since. Wyllie has built houses as a general contractor in New Jersey as well as owned his own windsurfing shop.  After filling his shop and garage with a fleet of handmade watercraft, he realized he was going to have to find a solution!  His solution was to build scale models. The largest is 1/4 scale at 4 feet long and the rest are around 1/12 scale at about 1 foot long.  Wyllie also builds custom one of a kind furniture out of unique pieces of wood.

Maria Collier is a Columbian born abstract artist who has lived in SW Florida for 40 years.  She was born an artist but began painting on canvas after being diagnosed with an auto-immune disease. The healing that occurred from being aligned with her true passion was life changing. The unusual tools she uses to move the paint around can be found in hardware stores. She uses them intuitively along with her other passion, music. Music is an integral part of her work. She names most of her work after the songs that inspire her and places the lyrics on the back of each canvas. She uses music and dance to help her capture the energy around her so it can be fully expressed in her work.

Byron Wood, after 30 years of managing his own business in the Chicago suburbs,  transformed his knowledge of metals into creation of works of art of profound impact and lasting beauty.   Inspired by the Southwest Florida environment, Mr. Wood specializes in depictions of the bird and water life that surrounds his home in Fort Myers on the Gulf Coast.  Mr. Wood displays his work in a number of galleries throughout Southwest Florida and in the Florida Keys.

Buck Ward tries to find the bits of of beauty, the natural interstices in the urban coastal landscape. To find art among the myriad signs, poles, wires and parking lots, to find a beach not crowded with people, a horizon with no cell tower is his challenge. He uses the light, the sky and clouds, the water, to enhance the built environment, to reveal the art of nature in the mundane works of humans.  Between the Everglades and the Gulf of Mexico, among the housing tracts, condos, shopping malls and tourist resorts, there are natural habitats that have been spared, where wildlife thrives. J. N. Ding Darling National Wildlife Refuge, Estero Lagoon, Corkscrew Swamp Sanctuary, Venice Rookery and other such places attract bird photographers from all over. Buck is lucky enough to live here – and can’t resist the dance of the reddish egret.

Michael Pinckney is a multimedia artist originally from Brooklyn, New York.  After being born in Brooklyn, he was raised in Chicago and became a part of the creative community there.  He works in several mediums including but not limited to; music, fashion, visual art, film and installation.  Four years after his voyage to Miami in 2005, Pinckney received a gift of inspiration from Experimental Video Artists, Frank Kanelos and Helena Tejada-Herrera and followed their advice to “create in any medium you see fit.” The couple led Michael to the chronology of icons such as Marcel Duchamp and Nam June Paik, paving the way to new areas of expression. It is only inevitable that Michael Pinckney take any series of material, trust his instincts and simply, express; forming pieces that weave through the realms of interior/exterior design, as Modern Urban Elegance.

Rick Plummer has been sketching and drawing since he was 6, and his earliest painting, which he still has, was done at age 10 or 12, he estimates.  But becoming an artist didn’t seem to be a dependable career move, so he became a dentist, known for his skill and care with patients.  After he married Madeleine and served in the Navy Hospital Corps he proceeded to dental school and then practiced in Fort Myers for 40 years. When he retired in 2014, he turned more fully to making art.  Six months into retirement, he had a major project: do the illustrations for a book celebrating the 100th anniversary of the legendary Musso & Frank Grill in Los Angeles restaurant.  With something that’s sort of between Pieter Bruegel the Elder and Hieronymus Bosch,  the style evolved into something chaotic liken to Mad magazine.

Tim Smith devotes his studio practice as a production potter, sculptor and painter while teaching for area art institutions throughout southwest Florida. In 2019, Tim opened his Sanibel Pottery Studio School to share his clay making expertise with people of all ages while continuing to teach at Cypress Lake High School’s Center for the Arts. Smith received his art degree from Art Institute of Chicago in 1983, He is the recipient of numerous fellowships and grants, one from Robert Rauschenberg, a major influence.

Join us on our 10-acre campus every Saturday to find an exclusive selection of locally grown, caught and cultivated foods and other products available to sample and purchase. Enjoy live entertainment by local musicians and fun activities for kids, gardening classes and live cooking by local chefs!