Songwriters in the Round with Charlie McCoy, Roy Schneider and Kim Mayfield 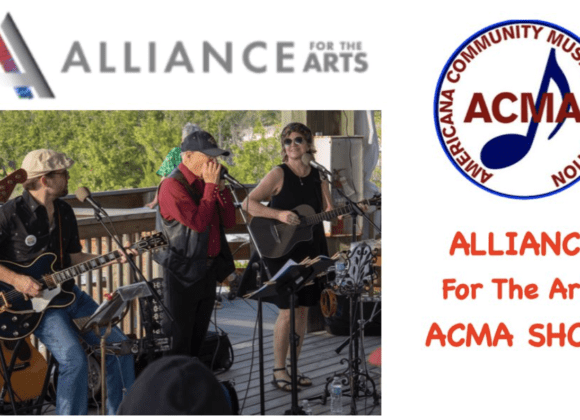 Our final ACMA Alliance show of the season will feature Charlie McCoy, Roy Schneider and Kim Mayfield, Songwriters in the Round.
Any musician in Nashville has heard of Charlie McCoy. A mainstay in Music City since the ’60s, Charlie has played on dozens of hit records, including work with such legends as Elvis Presley, Johnny Cash, Dolly Parton, Simon and Garfunkel, George Jones, Bob Dylan, Roy Orbison and many more. The solo work of this Country Music Hall Of Fame member is contained on more than three dozen albums that Charlie has released over the past four decades. Sharing the stage with Charlie are …Roy Schneider and Kim Mayfield.
Reckless Saints founder Roy Schneider was 16 and in hiding when a friend loaned him a guitar. He had just broken out of a Straight, Inc. facility after a horrific year-long incarceration, where he had been denied the right to play an instrument or even listen to music. Having access to a guitar again – as well as the support of good friends – helped him survive while he waited to turn 18, and begin his lifelong love affair with making music. Schneider went on to pursue visual arts, learning how to design toys in 3D, and writing and drawing the syndicated comic strip “The Humble Stumble” through United Media. Kim is better known as half of the Americana duo Roy Schneider & Kim Mayfield (now called Reckless Saints.) Reviewers have described her music as ‘pearly and sashaying,’ ‘pleasantly invoking the legendary Tammy Wynette,’ and ‘haunted by Patsy Cline.’ Mayfield’s song, Ring Around the Moon, made her a semi-finalist in the 2019 International Songwriting Competition.
How reservations work for outdoor concerts: We will be accepting the first 132 people for concert reservations. IF the weather threatens the outdoor concert it will be moved to our indoor theatre for general admission seats. If there is no weather threat we will sell additional tickets at the door on the day of the concert

A white eighteen-year-old from the Chicago suburbs, was arrested at O'Hare International Airport for conspiring with ISIS. Recent Harvard Law grad and practicing Muslim Claire Fathi has been brought on to prosecute. Inspired by real court cases, Selina Fillinger's crackling drama looks at two women fighting for justice in a world gripped by fear.

Enthralling, thought-provoking and inspired by real court cases • On her way to Syria, Susie Glenn, a Caucasian 18-year-old from the Chicago suburbs, is arrested and charged with terrorism. Susie had been…