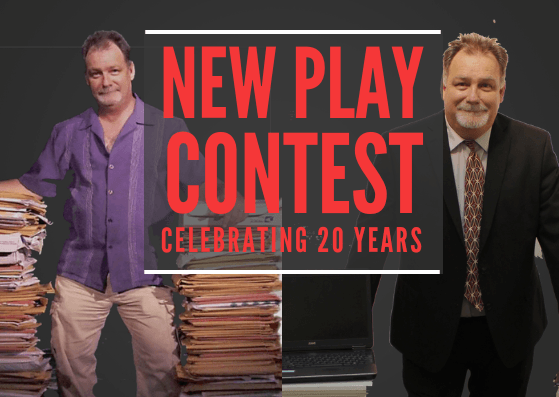 The evening will begin at 7 pm with a reception in the gallery with food, wine and drink. At 8 pm there will be readings from the top three entries to the Annual New Play Contest. After the last play is read, vote for your favorite and determine the winner. That show will then be produced in the 2019-20 season and receive the Janet & Bruce Bunch New Play Contest Award.

The New Play Contest, now in its 20th year, provides opportunity for audiences to get involved with the production process itself, rather than the end result. Finalists are selected from over 500 entries around the world.

Susan flew military planes in WWII, so men could go and fight. Now she’s been sent home to get back to normal, while the town waits for her local hero husband to come home.
Flying looks at life propelled by stories, as the town tells glory tales of Bob and Susan tries to put away her memories of flying.

Susan uses Bob’s legend to keep his family airfield going, so when his wounded gunner shows up looking for a job, she’s forced to hire him. Fisher struggles with an artificial leg and an airfield run by women, as the stories of the town reveal Susan through what they leave out.The background of this play is drawn from oral histories and memoirs of women who served in the WASP program in WWII. It explores the aftermath of war and the quiet, daily acts of heroism that never earn a medal.

A four-character comedy with bite, Engagement Rules follows the intertwined lives of two couples who advise and support each other on challenges of love, sex and the soul. The younger couple (early 30’s) is recently engaged, and the older (in their 70’s) has been married over fifty years.

Both couples face problems caused by sex, complicated by spiritual differences, forcing everyone to face seemingly irreconcilable differences and answer questions than none of them can answer easily. Engagement Rules is a play that strives to avoid old arguments and pat answers as it explores with compassion and humor the challenge of love and commitment.

Two actors, who were “America’s Sexiest Couple” on a popular ‘80s sitcom reunite for the first time in 30 years. They face a lifetime of unresolved issues, longings, resentments, and regrets. Plus, the network wants to reboot the show. Career and personal aspirations collide. Professionally and personally, where do they go from here?