Broadway, Balanchine, and Beyond: A Memoir 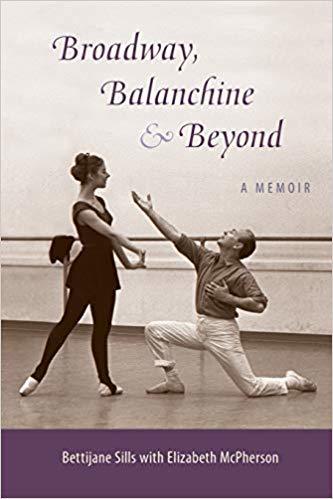 Join fellow Alliance members in the Main Gallery to explore literature – both fiction and non-fiction – revolving around art, artists, art history, and art appreciation. Participate in thoughtful group discussions and expand your appreciation and knowledge of the world of art!

In this memoir of a roller-coaster career on the New York stage, former actor and dancer Bettijane Sills offers a highly personal look at the art and practice of George Balanchine, one of ballet’s greatest choreographers, and the inner workings of his world-renowned company during its golden years.

Sills recounts her years as a child actor in television and on Broadway, a career choice largely driven by her mother, and describes her transition into pursuing her true passion: dance. She was a student in Balanchine’s School of American Ballet throughout her childhood and teen years, until her dream was achieved. She was invited to join New York City Ballet in 1961 as a member of the corps de ballet and worked her way up to the level of soloist.

Winningly honest and intimate, Sills lets readers peek behind the curtains to see a world that most people have never experienced firsthand. She tells stories of taking classes with Balanchine, dancing in the original casts of some of his most iconic productions, working with a number of the company’s most famous dancers, and participating in the company’s first Soviet Union tour during the Cold War and Cuban Missile Crisis.

She walks us through her years in New York City Ballet first as a member of the corps de ballet, then a soloist dancing some principal roles, finally as one of the “older” dancers teaching her roles to newcomers while being encouraged to retire. She reveals the unglamorous parts of tour life, jealousy among company members, and Balanchine’s complex relationships with women. She talks about Balanchine’s insistence on thinness in his dancers and her own struggles with dieting. Her fluctuations in weight influenced her roles and Balanchine’s support for her―a cycle that contributed to the end of her dancing career.

Now a professor of dance who has educated hundreds of students on Balanchine’s style and legacy, Sills reflects on the highs and lows of a career indelibly influenced by fear of failure and fear of success―by the bright lights of theater and the man who shaped American ballet.