Diva Comedy Night at the Alliance for the Arts Returns on Jan. 6 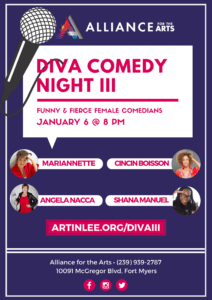 The Alliance for the Arts will present Diva Comedy Night on Jan. 6 at 8 p.m. in the theatre. This one night of side-splitting standup comedy features funny and fierce female comedians all from Florida. General seating tickets are $15 for Alliance members and $20 for non-members.

Mariannette LaPuppet, also known as ‘LaPuppet’ is an actress and creative writer of almost 30 years. She got her start on the comedy stage when she got a speeding ticket and instead of taking a class at the world famous ‘Improv Comedy Traffic Schools’ she convinced them to let her ‘teach’ them. Since then she has been bringing stages to life with her hysterical characters, animated storytelling and clever ‘Marianalogies’. She was a semi-finalist in the first Nick@Nite’s search for ‘America’s Funniest Mom’, Finalist in Comic Cure’s Florida’s Funniest Female, Winner of the 2015 Annual Comedians Ball in Florida and has worked alongside some of comedy’s heavy hitters like Dom Irrera and the legendary Paul Rodriguez.

Shana Manuel is a criminal defense attorney by day and stand-up comedian by night. When not in court defending the innocent she keeps her comedy chops sharp by writing about her daily life experiences and is well known for her hysterical Facebook comments. She keeps audiences entertained with her quick wit and smart humor. A crowd favorite at clubs like The Improv she was also the winner of the 2016 Pride Comedy Festival in Florida. 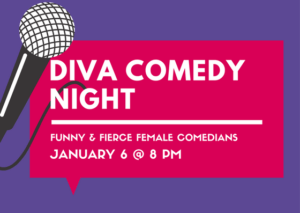 Angela Nacca represents all the moms, wives, working and menopausal woman of the world Angela Nacca will keep you laughing, telling her stories of her 37 year marriage (without going to jail) her career in the medical profession of the trials of menopause. Born and raised in New Haven, she was a finalist in Florida’a Funniest Female and placed 2nd in ‘The Ultimate Miami Comedian and was selected as one of the Top 101 comedians to compete in The World Series of Comedy in Las Vegas.

Trinidadian born Cindy-Ann Boisson (CinCin), spends way too much time in Florida explaining her name is not short for Cynthia! In 2014, she took a standup comedy class at The Improv at Hard Rock Fort Lauderdale, performing to a packed audience on graduation night! Since then, CinCin has performed at several festivals and venues throughout South Florida, New York City and the place she calls ‘home’ Trinidad and Tobago. In April 2017 she participated in Comic Cure’s Florida’s Funniest Female Competition and was among the finalists!