Alliance for the Arts Youth Theatre Announces Its 2017-2018 Season 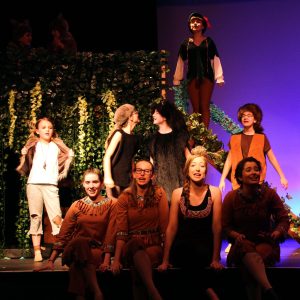 The Alliance for the Arts Youth Theatre is proud to announce its 2017-2018 Season, which includes beloved classics and comedic favorites such as Heathers, Junie B. Jones, Freckleface Strawberry, Spamalot and Almost, Maine. Performances are Fridays at 8 p.m., Saturdays at 3 p.m. and 8 p.m. and Sundays at 3 p.m. Seating is general admission and ticket prices range from $10-$20.

“I believe the arts inspire a sense of purpose in children that follows them as they grow up,” says youth theatre director Carmen Crussard. “I understand the importance of math and science and other subjects that promote industry. But the arts promote humanity, kindness, and relationships. This is where kids learn how to be team players, problem solvers, a collaborators and good friends.”

Auditions for Heathers and Junie B. Jones are Aug. 26 with callbacks on Aug. 31. Heathers is open to performers in 9th grade or older (age 14 and older). Be advised that this show contains controversial themes that may not be suitable for some families. A permission slip is required for each auditioner. Junie B. Jones is open to performers in 3rd through 8th grade. Spring audition information will be released late 2017.

On a cold, clear, moonless night in the middle of winter, all is not quite what it seems in the remote, mythical town of Almost, Maine. As the northern lights hover in the star-filled sky above, Almost’s residents find themselves falling in and out of love in unexpected and often hilarious ways. Knees are bruised. Hearts are broken. But the bruises heal, and the hearts mend—almost—in this delightful midwinter night’s dream. The play, a series of nine vignettes about love, is knee-deep in whimsy.

Based on the classic 1989 film, Westerberg High is ruled by a shoulder-padded, scrunchie-wearing junta: Heather, Heather, and Heather, the most powerful and ruthless clique in all of Ohio. But misfit Veronica Sawyer rejects their evil regime for a new boyfriend, the dark and sexy stranger J.D., who plans to put the Heathers in their place – six feet under.

It’s Junie B.’s first day of first grade, and a lot of things have changed for her: Junie’s friend, Lucille, doesn’t want to be her best pal anymore and, on the bus, Junie B. makes friends with Herb, the new kid at school. Also, Junie has trouble reading the blackboard and her teacher, Mr. Scary, thinks she may need glasses. Throw in a friendly cafeteria lady, a kickball tournament and a “Top-Secret Personal Beeswax Journal,” and first grade has never been more exciting.

Freckleface Strawberry will do anything to get rid of her freckles – from scrubbing them with soap to caking on makeup… and even wearing a ski mask to school! Will her schoolmates realize that it’s her under the mask? Will Freckleface be brave enough to finally face her complexion in the mirror? With the help of her loveable schoolmates, including an amazingly talented ballerina, a cutie jock, a charming ditz and a totally kooky teacher, Freckleface learns that everyone is different – and that’s what makes everyone special.

England 932 A.D. A Kingdom divided. To the West the Anglo-Saxons, to the East the French. Above nothing but Celts and some people from Scotland. In Gwynned, Powys, and Dyfed – Plague. In the kingdoms of Wessex, Sussex, Essex and Kent – Plague. In Mercia and the two Anglias – Plague. With a 50% chance of pestilence and famine coming out of the Northeast at twelve miles per hour. Legend tells us of an extraordinary leader, who arose from the chaos, to unite a troubled kingdom. A man with a vision who gathered Knights together in a Holy Quest. This man was Arthur, King of the Britons. For this was England!