The Alliance for the Arts Presents Your Love, Our Musical by Rebecca Vigil & Evan Kaufman Jan. 11 – 14 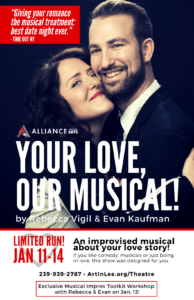 Theatre Conspiracy at the Alliance for the Arts presents a limited run of  Your Love, Our Musical by Rebecca Vigil and Evan Kaufman from Jan. 11 – 14.

Fresh off their successful run in New York City, comedic musical improvisers interview a couple in the audience about their relationship and spin an impromptu musical about the couple’s love story. Using their unique chemistry, vocal skill and improvisational abilities, Vigil & Kaufman transform an audience’s story into bombastic choruses.

The interactive show was accepted into the 2015 New York City International Fringe Festival, where it won Best Acting. In 2017, the production appeared on Bravo’s Million Dollar Listings: New York.

Vigil and Kaufman will also host a Musical Improv Toolkit Workshop on Jan. 13. The workshop will focus on song structure, improvised choruses, rhyming and scenes becoming a song.

“The premise sounds nearly impossible, but the execution is reliably brilliant.” — The NY Times

“They’ve mastered the art form, their chemistry as artists… as much a part of the show as the chemistry behind the couple they feature.” — The Village Voice

“Perhaps it could even warm the heart of the most jaded millennial.” — Bedford & Bowery