Alliance for the Arts Presents Grounded by George Brant, directed by Bill Taylor 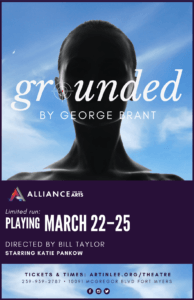 The Alliance for the Arts presents a limited run of Grounded by George Brant March 22-25 at 10091 McGregor Blvd. Fort Myers, FL 33919. The production is directed by Theatre Conspiracy Founder and Artistic Producing Director Bill Taylor and stars Katie Pankow as The Pilot. This one-woman show targets our assumptions about war, family, and the power of storytelling.

Grounded is the story of an ace fighter pilot who becomes pregnant and gets reassigned to operating drones from a windowless trailer on an Air Force base in the desert outside Las Vegas. Hunting terrorists by day and coming home to her family by night, the boundaries between reality and the screen – between the desert where she lives and the desert where she fights – blur as the pilot struggles to navigate her dual identities.

Katie Pankow is a classically trained actress based in South Florida. She has previously starred in Lend Me A Tenor, BIG ARTS Strauss Theatre; Swell Party, Theatre Conspiracy; The Odd Couple (Female Version), Off-Broadway Palm, Ajax in Iraq, University of Florida. A bit of a jack-of-all-trades, Katie is a published poet, an award-winning radio news journalist, and a decorated artist.

“This visceral production demands a strong female actor who can own the show and we’re thrilled to welcome Katie, one of the best in southwest Florida,” says Bill Taylor. “Grounded is a riveting play filled with powerful storytelling about the dualities of war and family.”

To purchase tickets or for more information, call the box office at 239-939-2787 or visit www.ArtInLee.org/Theatre.

What the Critics Say

“A searing piece of writing”—The Guardian

“As close to perfection as is possible to imagine…Grounded is a powerful, hallucinogenic experience.” – What’s On Stage

“Thought provoking, thoroughly engrossing…pulses with the rhythms of an epic war poem” – TheatreMania