Alliance for the Arts Presents an Evening of Poetry, Theatre and Art during SoCo Second Saturday on Aug. 12 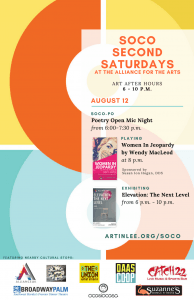 The Alliance for the Arts offers special extended hours during SoCo Second Saturday on Aug. 12 from 6 – 10 p.m. The evening features a poetry open mic night, Theatre Conspiracy’s production of Women In Jeopardy by Wendy MacLeod and Elevation: The Next Level exhibit.

Southwest Florida poets are invited to share their work during an open mic night titled SoCoPo from 6-7:30 p.m. The event is free to attend and open to poets of all ages and to those who simply enjoy soaking up spoken word, but a $5 suggested donation is encouraged to support affordable programming. Poets must share original work.

At 8 p.m. Theatre Conspiracy at the Alliance for the Arts presents Women in Jeopardy by Wendy MacLeod and directed by Bill Taylor. Liz Abbott, Stephanie Davis and Karen Goldberg star in this riotous comedy about trading in wine glasses for spy glasses when the mid-life crisis just isn’t your speed. Attempting to get to the bottom of a murder mystery, these ladies’ imaginations run wild as they try to discover the truth and save their friend in this hilarious adventure.

The production is sponsored in part by Susan Ion Hogan, DDS. Individual tickets to each show are $25, $11 for students or $22 for Alliance members.

Elevation: The Next Level

The Elevation: The Next Level exhibit will remain open from 6 – 10 p.m. during Second Saturday. Admission to the gallery is free, but a $5 suggested donation is encouraged to support affordable programming. Extended gallery hours apply only on the second Saturday of each month.

To purchase tickets to Women in Jeopardy or to learn more about this event, visit www.ArtInLee.or/SoCo or call 239-939-2787.

SoCo Second Saturday is a burgeoning partnership of arts, cultural and business organizations bordered by Colonial and McGregor boulevards. SoCo, which is short for “south of Colonial,” was originally introduced in the 1990s as a bohemian village of upcoming artists. Today, SoCo is being reestablished as the southwest Florida’s newest arts and cultural district and features scheduled performances, talks, short plays, open houses, artist demonstrations, gallery openings, wine tastings and other activities the second Saturday of each month.