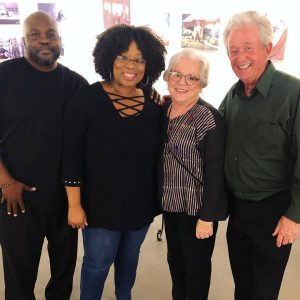 Unlike most new play competitions, this contest welcomes works that have been produced before. The three finalists for the 2018-2019 New Play Contest were selected from over 600 entries across the United States, Canada, Israel, Thailand and England. Finalists included: Flying by Sheila Cowley, Engagement Rules by Rich Orloff and America’s Sexiest Couple by Ken Levine.

An excerpt from each play was presented as staged readings, without costumes and props. After the conclusion of the final reading, the audience voted on which play they wanted to see, which will be given a full production in the Alliance for the Arts’ 2019-20 Season. The playwright also received the Janet & Bruce Bunch New Play Contest Award.

The winner of the New Play Contest is Engagement Rules mostly a comedy by Rich Orloff. A four-character comedy with bite, Engagement Rules follows the intertwined lives of two couples who advise and support each other on challenges of love, sex and the soul. The younger couple (early 30s) is recently engaged, and the older (in their 70s) has been married over fifty years.

“Processing over 600 entries is a daunting task, but the impact of a good script will be felt immediately. I think the audience would agree all three play finalists are worthy of production,” says artistic producing director Bill Taylor. “Unfortunately we only pick one winner and we look forward to the production of Engagement Rules.”

The playwright, Rich Orloff, is one of the most popular unknown playwrights in the country. His plays have received over two thousand productions, numerous awards, and oodles of laughter. Author of over a dozen one-acts and 80 short plays, Rich’s short works have had over 1,800 productions on six of the seven continents… and a staged reading in Antarctica! Born and raised in Chicago, and a graduate of Oberlin College in Ohio, Rich currently lives in New York City.  He likes to get out of town frequently to remind himself what the rest of the world is like.

Tickets for the current Alliance for the Arts theatre season can be purchased at ArtInLee.org/Theatre or by calling 239-939-2787.