NYC-based writer and performer Amy Marcs brings her critically acclaimed, one-woman reconstructive comedy Nice T!ts  to the Alliance for the Arts on March 17, 18 and 19. Nice T!ts is a comedic exploration of Marc’s roller-coaster experience with cancer and its effect on her perception of femininity, womanhood, confidence and mortality. It’s a unique perspective full of humor and heart-felt honest. The show has played to sold-out houses at The People’s Improve Theatre in New York since 2014.

“I hope to be of service to others with my show. To give hope to women who are going through this, so they know they’re not alone and that they are still beautiful, vibrant and sexy,” said the show’s creator Amy Marcs. “My story is about the resiliency of the human spirit and finding self-acceptance, love and hope in a very difficult and traumatic situation. And of course, all told through humor, because I believe that is one of the best healing tools we have.”

Performances are sponsored in part by the Meisenberg Family Trust.

“Marcs finds the universal in one woman’s story. She has the breezy pace and snappy timing of a stand-up comedienne.” – Lancet Oncology Journal

★★★★★ “A universal story about the losses that challenge our identity, told with humanity and humor. Just what the doctor prescribed.” – Front Row Center

“Simultaneously hilarious and touching. One show you don’t want to miss!” – Bust Magazine

Amy Marcs is an actress and voice over artist signed with The Don Buchwald Agency. Amy wrote and stars in her autobiographical one woman show Nice T!ts, which she has  performed to sold out crowds at The PIT Loft in NYC and Project Y’s “Women in Theatre Festival” on Theatre Row. Amy was a guest on Fresh 102.7 and Sirius XM Doctor Radio to discuss her show and offer her perspective as a breast cancer patient and survivor. Amy has worked in regional theaters across the country. Some of her favorite roles include Gorgeous in The Sisters Rosensweig, Myrtle in Kingdom of Earth and Lucille in Gemini. You can see her in the independent film The Waiting Game, starring Will Arnett, and hear her as the voice of Peg the Pig in the animated feature film Impy’s Island, which premiered at the Tribeca Film Festival. Her voice has been heard on numerous national network television promo and political campaigns. She is an acting professor at The New York Conservatory for Dramatic Arts, is on the faculty of ACTeen and also has a very successful private coaching practice. Amy is grateful to have an opportunity to share her story and to use the transformative power of art to heal.

Peter Michael Marino is an award-winning solo show teacher, director, producer and performer – best known in the Ft. Myers area for his solo comedy Desperately Seeking the Exit which played Theatre Conspiracy in 2012, as well as several shows at The Old Schoolhouse Theater on Sanibel. Pete is the creator/co-producer of SOLOCOM, which has launched over 400 world-premiere, international solo comedies at The People’s Improv Theater since 2013. His acclaimed solo comedy Desperately Seeking the Exit chronicled the unmaking of his West End musical flop Desperately Seeking Susan – receiving 5-star reviews at the Edinburgh Fringe and Adelaide Fringe, and a London transfer. His 2015 solo chat show spoof, Late with Lance!, played everywhere from NYC to London. His current semi-improvised solo show, Show Up, deconstructs the solo show genre and is both about and directed by the audience. 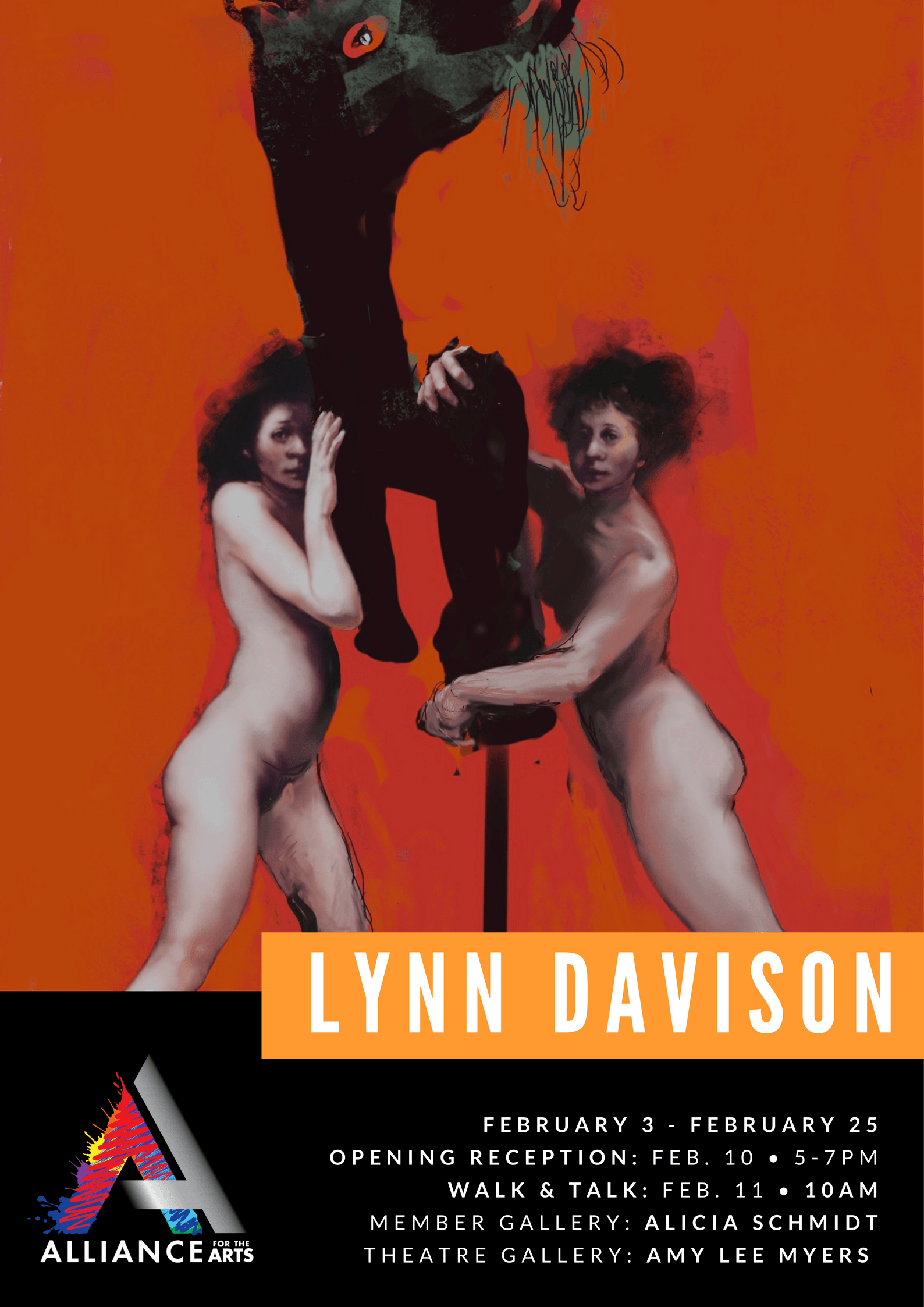 Davison, a graduate of the Ringling School of Art and Design, is a figurative painter who hopes to provoke introspection through her work; intending to reveal of a universal truth of what it means to be human, disconnected and vulnerable. Davison’s figures are the opposite of idealized. Often using herself as a model, her forms are brutally honest. The surrealistic and haunting settings of her paintings only contribute to the enigma that she creates.

During this exhibition, Alicia Schmidt will be on display in the Member Gallery.

Theatre Conspiracy presents Ma Rainey’s Black Bottom by August Wilson directed by Sonya McCarter.  Ma Rainey’s Black Bottom is set in a 1927 recording studio in Chicago.  The story takes place over the course of an afternoon as a group of musicians and the legendary blues singer, Ma Rainey, record several songs. The audience will learn about four musicians’ perspective on issues of race, art, religion and the historic exploitation of black recording artists by white producers.

Ma Rainey’s Black Bottom opens Feb. 24 and continues through March 5 at the Alliance for the Arts (10091 McGregor Blvd. Fort Myers FL 33919).  A talkback with Director Sonya McCarter and cast will take place after the March 5th performance. Talkbacks are open to the public and allow the discussion of ideas, themes and performance of the play.

“August Wilson is lyrical, extraordinary and powerful playwright,” says Bill Taylor, Founder and Producing Artistic Director of Theatre Conspiracy. “This is a fabulous opportunity to highlight one of his best plays.”

The Ma Rainey Cast includes a host of local actors including:

Performances are Feb. 24 – March 11 on Thursday, Friday, and Saturdays at 8 p.m. with one Sunday matinee on March 5 at 2 p.m. Tickets are $24 or $11 for students with proper ID. Thursday nights are “buy one get one half off.” Alliance for the Arts Member Theatre Night is Friday, Feb. 24 and tickets are $15 for members of the Alliance of the Arts.

This production is generously sponsored by Noreen Raney.

Our resident theatre company, Theatre Conspiracy, is committed to producing and promoting the work of the next generation of great playwright. This series will highlight the work of 6 local playwrights. Readings will be presented in the Foulds Theatre at the Alliance for the Arts.

Theatre Conspiracy’s playwright group is made of playwrights from across southwest Florida. The group meets each Monday to read a member’s work and provide feedback on the script. The conclusion of the years of public readings gives the playwrights a chance to see their work performed in front of a live audience. A question and answer session follows each reading, providing the playwright unique feedback.

The first work presented will be “The Afterlife of Swans” by Louise Wigglesworth on Jan. 23 at 8 p.m. In The Afterlife of Swans, all the technological fail-safes have backfired. At 2:30 a.m. Manhattan is blacked out and without phone service. Two women are trapped in a theatre as something violent rages outside.

The series will continue of Feb. 13 at 18 p.m. with two one-act plays. In The First Step by Bob Maxeiner, a young wife finds the job of her dreams, but it carries a condition. Tinker’s Vision by Wally Kain tells the story of a brilliant young atheist that has a religious vision.

Biblically Speaking by John Repa
March 13 at 8 p.m.
Two timeless (and at times, clueless) friends take the audience on a trip through the books of the Bible from Genesis through Revelation.

Affirmation by Fay Graetz
April 15 at 3 p.m.
A televangelist has his faith tested during a shooting rampage in his church.

The Alliance for the Arts will hold auditions for its upcoming youth theatre production of “Peter Pan Jr.” on Saturday, January 21 from 9 a.m. – 1 p.m. Young thespians grades 6th through 9th grade are encouraged to register for audition slots.

Students should prepare to sing 32 bars or 1 minute of a musical theatre song. Bring an instrumental track of your audition song. A CD player and aux cable will be available at auditions. Auditioners should dress comfortably and be prepared to dance. Choreography will be taught and performed during your audition time. Please bring a resume and 4×6 inch, portrait orientation headshot.

Callbacks will be January 22 in the evening. If cast, there is a $250 fee for this program with limited scholarships available. Final performances will take place at the Alliance for the Arts on April 28 and 29 at 8 p.m. and April 29th at 3 p.m. & April 30th at 7 p.m.

Based on J.M. Barrie’s classic tale and featuring an unforgettable score by Morris “Moose” Charlap and Jule Styne with lyrics by Carolyn Leigh and Betty Comden and Adolph Green, Peter Pan is one of the most beloved and frequently performed family favorites of all time. This high-flying Tony Award-winning musical has been performed around the world and delighted audiences for 60 years and is now adapted for young performers.

Peter and his mischievous fairy sidekick, Tinkerbell, visit the nursery of the Darling children late one night and, with a sprinkle of pixie dust, begin a magical journey across the stars that none of them will ever forget. In the adventure of a lifetime, the travelers come face to face with a ticking crocodile, a fierce Indian tribe, a band of bungling pirates and, of course, the villainous Captain Hook.

Featuring the iconic songs, “I’m Flying,” “I’ve Gotta Crow,” “I Won’t Grow Up” and “Never Never Land,” and a rousing book full of magic, warmth and adventure, Peter Pan JR. is the perfect show for the child in all of us… who dreamed of soaring high and never growing up. Peter Pan JR. is a dream come true for groups looking to bring magic to their stage and entertain countless families.