The Alliance for the Arts is issuing a call to poets for its inaugural Chapbook celebration on April 5, 2018. Selected poems will be published in a National Poetry Month celebratory chapbook.

Online submissions are due by February 23, 2018. To be eligible for entry, poets must reside in southwest Florida and be able to attend the Chapbook reading on April 5, 2018. Poets chosen to participate will be notified in mid-February. A nominal submission fee of $5 is required, which covers the cost of publication.

For submission guidelines and to submit your work online visit: www.artinlee.org/chapbook.

The 2018 Chapbook Juror will be Joyce Peseroff. Peseroff is the author of five collections of poetry, including The Hardness Scale (1977, reissued in 2000), A Dog in the Lifeboat (1991), Mortal Education (2000), Eastern Mountain Time (2006), and Know Thyself (2015, Carnegie Mellon Poetry Series). Her most recent collection was designated a “must read” by the 2016 Massachusetts Books Awards. She has served as an editor for Ploughshares and edited The Ploughshares Poetry Reader (1987), Robert Bly: When Sleepers Awake (1984), and Simply Lasting: Writers on Jane Kenyon (2005).

Her honors include grants from the National Endowment for the Arts and the Massachusetts Artists Foundation as well as a Pushcart Prize. Peseroff lives in Bedford, Massachusetts, and spends the winter in N. Fort Myers, Florida She taught at the University of Massachusetts-Boston, where she directed the Creative Writing MFA Program in its first four years.

Theatre Conspiracy at the Alliance for the Arts presents Seven Guitars by August Wilson, directed by Sonya McCarter this November. This lyrical play is part of August Wilson’s American Century Cycle, which charts the African-American experience through each decade of the 20th century.

After serving jail time on a trumped-up vagrancy charge, blues musician Floyd Barton sets out to win back his girl and reclaim his pawned guitar, hoping to make a new hit record. Set in 1948 in the backyard of a Pittsburgh apartment house, Seven Guitars follows Floyd’s circle of friends and neighbors—the play’s seven voices—as they spin a rich tale of the deck that’s stacked against them, what they’ve lost and all they dream.

“August Wilson excelled at writing plays that chronicle the black experience in America, spanning several decades,” says director Sonya McCarter. “What impresses me the most about his work is its universal themes of love, honor, duty and betrayal. No matter your race, religion or cultural background, his stories accentuate the passionate, fearless and indomitable spirit of mankind despite life’s struggles.”

Seven Guitars opens  Nov. 3 through Nov. 18 at the 10091 McGregor Blvd. Fort Myers, FL 33919. Performances are Thursdays, Fridays and Saturdays at 8 p.m. with a 2 p.m. matinees on Sunday. This production of Seven Guitars is kindly sponsored by Noreen Raney.

Season subscriptions  are available and range from $105 per person for 5 shows to $133 per person for all 8 shows. Individual tickets to each show are $25, $11 for students or $22 for Alliance members.

Southwest Florida poets are invited to share their work at an open mic night on Oct. 26 from 7 to 9 p.m. designed to bring together different generations, styles and approaches to poetry. The event is free and open to poets of all ages and to those who simply enjoy soaking up spoken word, but a $10 suggested donation is encouraged to support future Alliance programming. Additional Poetry Open Mic Nights will be held on Jan. 25 and April 26.

Hundreds of pieces of artwork created by Alliance for the Arts members will fill the gallery walls during November during Small Works Exhibit: 200 Under $200. Coinciding with the onset of the holiday shopping season, this non-traditional art show features works of all mediums priced at $200 or less. All sales are “cash and carry,” meaning purchasers will get to take the piece with them when they buy it, instead of waiting until the end of the exhibit. This exhibit is kindly sponsored by Clif & Tina Parker.

The gallery will evolve as pieces disappear and the remaining pieces are repositioned. The opening reception is Friday, Nov. 3. Bonnie Bohn will be exhibiting in the member gallery. The Theatre Gallery will house works by Marcela Paz Soldan. The exhibit runs through Dec. 2.

For artists looking to participate, the Alliance invites its members to submit two (2) original 2D or 3D artworks for exhibit in the Gallery. All works must be for sale. This cash and carry exhibit will provide a shopping experience for art lovers of all kinds! Drop off Monday, November 14, 9AM-5PM.

Admission to the gallery is free, but a $5 suggested donation helps keep arts programming accessible.

AMY GINSBURG MADE multitasking look easy last week as she took phone calls, messages, door-knocking inquiries and the warm greetings of passing musicians all in stride — a stride that would help lift the Southwest Florida Symphony smoothly into its challenging schedule for fall, winter and spring two weeks early. “It’s like a roller coaster, and going up to the top of the hill is the hard part,” she said cheerfully.

An already demanding season kicks off with a Hurricane Irma Relief Benefit Fund Concert at the Sidney & Berne Davis Art Center at 7:30 p.m. Friday, Oct. 19. Musicians are traveling from as far as Miami to join Maestro Nir Kabaretti and concertmaster Reiko Niiya in solo performances (a rare opportunity to see then-maestro play.) This is good news not just for hurricane victims, not just for lovers and admirers of one of the best symphony orchestras in Florida, but good news for the economy.

The musicians are traveling and playing for free — their contribution. But downtown will likely fill with music lovers who will also visit restaurants and bars, wander into shops and in some cases even look to stay at a downtown hotel or elsewhere for a night.

The moment will be a vivid example of why the arts are so potent economically in any community, but especially in Lee County. “They’re integral in creating places,” says Lydia Black — “in creating communities, in bringing people together not only to share experiences and be informed and entertained, but we use the arts — music, dance, theater, visual arts — to help celebrate life. They define a community.” Ms. Black, the executive director of the Lee Alliance for the Arts, points to the most recent study by the national group, Americans for the Arts, that details or tracks the impact of every dollar spent in a community on the arts. 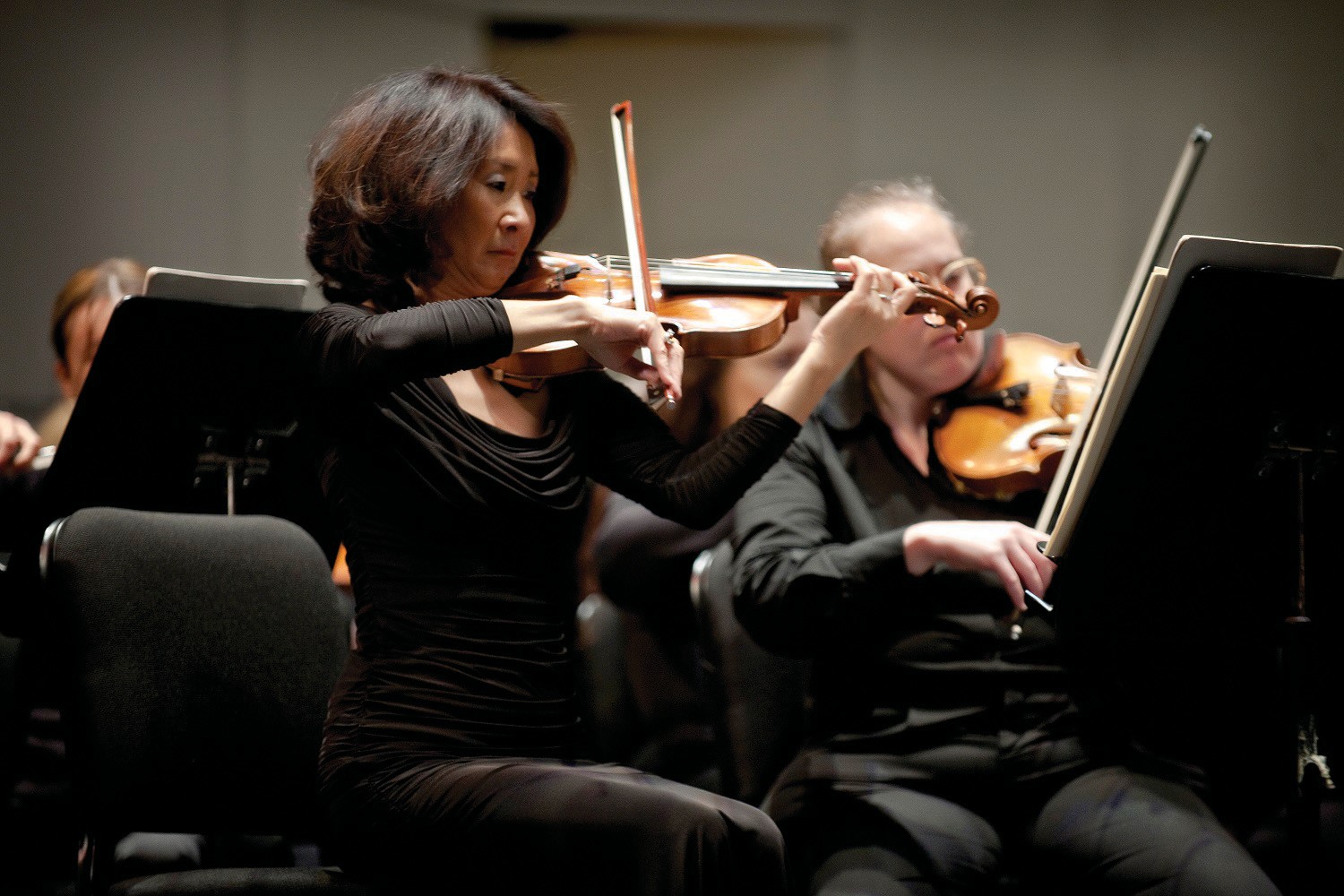 “Here in Lee County the arts create jobs for almost 4,000 people and $140 million in economic activity every year,” she notes.

The report itself, called “Arts & Economic Prosperity5,” is an eye-opener of sorts. It looked at more than 340 communities nationwide and customized data in a large number of them, including Lee County.

Event-related spending is $106 million by those who go to an event, and each attendee spends an average of more than $31, in addition to ticket costs.

Part of this survey included asking 781 people attending events a variety of questions, the methodology shows. “Artists are considered entertainers — we go to a show, we see a band, we go to a gallery — and we take that for granted,” says Ms. Black.

“At the Sidney & Berne Davis Center, for example, they just brought in Second City from Chicago (the famous comedy group). They don’t get here often and people flock to it.”“But these other things — there’s a host of people behind the scenes, employing other people and they all spend locally.

Jim Griffith, a founder of the Davis Center downtown, is adding a rooftop restaurant and a recording studio among other advances in what has now become a downtown lodestar with tremendous gravity. “I like to think we have contributed to the rebirth of downtown,” he says — a comment he makes often, and always modestly, acknowledging with pride the Arcade Theater and others downtown.

The same is true of each art gallery, of each city event featuring music, of Barbara B. Mann Hall performances, of such special draws as the Fort Myers Film Festival and the theaters through Fort Myers and Lee County.

The Nickel Ride, a free transportation service operating throughout downtown Fort Myers, for example, has expanded the definition of downtown east past The Laboratory Theater on Woodford Avenue, which now offers sold-out and well-reviewed theater performances throughout season. Like Mr. Griffith, founder and director Annette Trossbach is also perhaps unduly modest about the effect of her organization and the arts on the city and county — on the people — around her.

“I want to think we’re part of a growing downtown and a culturally rich region — that we contribute to that,” she told Florida Weekly recently.

Does this create competition with other regions — with Naples, for example, where ARtis-Naples, with its art museum and symphony, is a significant draw to many Lee County lovers of culture?

“The more opportunities we have in the region to engage the community with arts, the better it is for all of us,” says Ms. Black. “All boats rise with the tide.

“If someone goes to the Southwest Florida Symphony, they’re more likely to go to Artis Naples or the Ringling Museum in Sarasota,” she said. “I think Lee in particular benefits from the work Collier County has done investing in its arts community. So I don’t see this as competitive. I see it as an opportunity for all the arts to be elevated. The sharing between arts organizations helps build communities and creates significant economic development.”

Back at the symphony offices, meanwhile, Ms. Ginsburg holds roughly the same view.

“The arts in general and the symphony in particular are a large part of how a community is regarded, based on the depth and breadth of the arts and culture it offers,” she says. 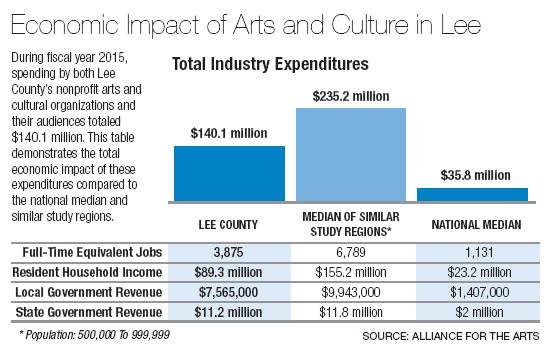 And that’s worth money.

“The housing booms wouldn’t be what they are, the tourism dollars wouldn’t come in here — you go out to dinner and that’s an hour of your evening. People are looking for other things to do before or after that, and their spending flows into the community.” ¦