This year’s workshop series is titled “When the Shelves Go Bare” and deals with increased concerns about a potential future shortage.

“Just as we pay insurance for our cars, but don’t expect to be in an accident, we should know the basics of growing our own food as insurance against potential disruptions that may or may not come,” says organic farmer and GreenMarket Manager Santiago De Choch.

Inspired by growing up in civil unrest in South America, De Choch experienced his share of bare shelves. Later, he traveled and lived in areas that went through different events affecting the food security of the population, including Eastern Europe in the years following the collapse of the Berlin wall, Latin America and the Middle East.

Theatre Conspiracy presents the world premiere of the thrilling and suspenseful NOLI TIMERE (Don’t Be Afraid) by Jared Michael Delaney and directed by Bill Taylor at the Alliance for the Arts. NOLI TIMERE (Don’t Be Afraid) is the winner of the 2016/2017 New Play Contest. The contest, now in its 18th year, provides opportunity for audiences to get involved with play selection and production. This is the last production of Theatre Conspiracy’s 2016/2017 season.

NOLI TIMERE (Don’t Be Afraid) opens May 5 and runs until May 20 at the Alliance for the Arts. The play tells the story of a newly-ordained priest and his sister who are made to confront something from their past that neither is expecting when a strange man knocks on the door of the rectory late one night. A confrontation occurs that leads them both into a frightening world that may, in fact, just be our own.

The cast is set with local actors including:

Theatre Conspiracy held its New Play Contest Fundraiser in November 2016. The three finalists for the 2016/2017 New Play Contest were selected from over 600 entries across the United States, Canada, Israel, Thailand and England. An excerpt from each play was presented as staged readings, without costumes and props. After the conclusion of the final reading, the audience voted on which play they wanted to see. NOLI TIMERE (Don’t Be Afraid) was the selected winner.

“New playwrights need support and we’re honored to use this opportunity to propel the future of theatre,” says Theatre Conspiracy Founder and Artistic Producing Director Bill Taylor. “The script of NOLI TIMERE captivates you from the beginning and you’re left wondering what’s coming next.”

The Alliance for the Arts May exhibition Pushing Boundaries: Art Quilters Unlimited opens May 5 from 5-7 p.m. The exhibit continues until May 26. Meet exhibiting artists during a conversational walk and talk as they discuss their works on May 6 at 10 a.m.

“Fiber art is a unique way to exchange ideas,” says exhibitions coordinator Krista Johnson. “Throughout time, different cultures everywhere have been, and still are, weaving and sewing.” 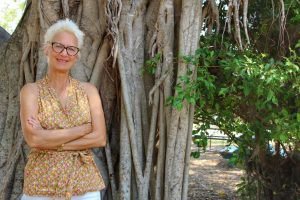 The Alliance for the Arts is initiating a new campaign highlighting members who are creative. We are reaching out to poets, painters, playwrights – those who work with scores, scripts, stitches – favor Arp, Arbus, Atwood – or love pencils, plays, or pianos.

Fay Graetz is a Playwright, a member of the Alliance for the Arts and a founding Alliance book club member. We are proud to introduce her. Her play Affirmation will be presented April 15th at 3 pm as part of the Theatre Conspiracy’s Play Reading Series. Learn a little bit more about Fay through our Mini-Proust Questionnaire.

With all expenses paid to pursue your writing, where would you choose to live and work next summer?

So kind of you to offer!  New York City.

If you didn’t write, what would you like your creative outlet to be?

I’d love to have a lovely singing voice and warble to my heart’s content.  It must be wonderful fun belting it out with a band or orchestra.  Otherwise, any creative outlet that doesn’t require “plot.”   Is cheese-making creative?  I love cheese.

What playwright, living or dead, would you have liked to meet and what would you ask him or her?

Shakespeare! For starters, I’d ask, with due respect, “Did you really write all that?” And, “Do you have any other hobbies?”

My Big-Spender Husband.  If it wasn’t for him, I’d be living like a pauper with a mattress stuffed with cash.  He’s got “spending vision.”  And good taste.  So, that’s a good thing

What historical person do you most identify with?

Does Annie Hall count?  This is a tough.  There are zillions of historical people and more every day.  The word “identify” makes me cautious; but, I’ll give it a try, with the utmost humility.

I’m going with a combination of Eleanor Roosevelt and Phyllis Diller, for the obvious reasons.  They marched on with or without Franklin and Fang. (Fang!)  And because I love people and story-telling and learning about other cultures and languages:  add Margaret Meade into the mix.

Fay Graetz is a playwright and member of the Theatre Conspiracy Playwrights of Fort Myers and the Dramatists Guild of America. “On the Hard” (two acts) was produced in 2008 at the Purple Heart Theatre in Fort Myers and a staged reading of “Wind Farm” (two acts) occurred in 2014 and was a semi-finalist of the 2015 Ashland New Play Festival. In addition she has received fiction awards from Florida Weekly and Gulf coast Writer’s Association and was awarded a seat at the Gulf Coast University Sanibel Writer’s Conference in 2008 and 2012.

The Proust Questionnaire has its origins in a parlor game popularized (though not devised) by Marcel Proust, the French essayist and novelist, who believed that, in answering these questions, an individual reveals his or her true nature.

I believe it is important to support live theater in Florida. We must get tickets and get out of the house and go. Your kids and grand kids need to know live theater.

There is a perfect “must see” on a local stage right now.  It is a  World Premier at the constantly experimental Theatre Conspiracy in Fort Myers. The artistic director, Bill Taylor, has found a play totally worthy of our attention. It is called, The Cave, by Jeff Lindsay.

The time is near the end of the Civil War. We meet a young African American runaway slave girl, Cassie, played by a fine young actress, Marie Baptiste.   Cassie  is trying to read the Bible, never having been to school. She knows enough to phonetically struggle.  And, suddenly, a badly wounded Confederate soldier breaks through the hole in her hideaway cave.  The soldier, Brandon, strongly portrayed by Jordan Wilson, has been blinded in battle, tattered and torn, and near collapse.  The plot thickens when a young Union soldier who has deserted his unit bursts into the cave.  It is a powerful evening and a fine example of great local community live theater.    Get tickets fast.

Sidney B. Simon, Sanibel
from The News-Press Mailbag for April 2